Joi Ito and Digital Garage held their 4th "New Context Conference" at Garden Hall in Ebisu Garden Place last week. The event is free of charge, and the fact that DG can pull together such a wide variety of speakers - primarily from companies in which they have an interest - is testament to the breadth of their portfolio.

The theme for this year's two day conference was the "Open Business Network" that the Internet allows.

Day 1 began with the opening speeches:

These set the theme for the conference - Open Networks - allowing new types of business relationships to be formed cross-company. Hayashi-san also referred to the new possibilites for new "Social Entrepreneurs" to use the infrastructure to further their non-profit driven ambitions. 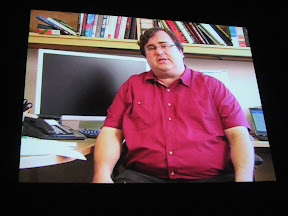 - Keynote from Reid Hoffman - "How LinkedIn and Facebook are developing Open Business Network"
Reid - Founder of LinkedIn and Investor in Facebook - was not able to make the event due to "business and personal reasons", but sent in a video of his presentation, and fielded a Q&A session over Skype at the end, taking questions via Twitter. Unfortunately Twitter does not work on my au WIN cellphone (but at least it can handle it's beer ... see slideshow and comments from Day 2 :)

Reid spoke of the competitive advantages and the speed and directness of communication that such flattened communications networks facilitate. As more and more people join them, they are moving from a "nice to have" to a "business essential".

Naturally - being from Linked In - he also contrasted Social Networks with Business focussed ones, and reminded people that all of their online social interactions are part of the brand oneself. 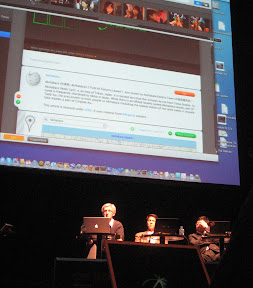 Eric Young, Founder of iKnow - talked about the iKnow online application, and how it allows users to mash up CGM into (and other language) English Lessons.

Mitsuhiro Takemura, Professor at Sapporo City University - spoke about the university and it's efforts in visual media, online learning, and media creation. As part of the presentation he showed off a video produced by his students about Oki-san, an Ainu crossover musician who plays the Tonkori - a traditional Ainu stringed instrument - and mixes it with Dub Reggae... I actually found myself drawn into the video - perhaps due to the contrast with Takemura-san's dry academic content. 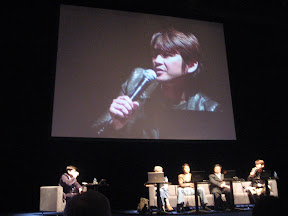 This one didn't really do it for me. In an attempt to show how one can be successful through digital distribution while bypassing the Record Industry, Mizuguchi-san showed off some of his digital creations, including performances from a hologram, and some guy dancing in a space suit. It seems that his main message was that if you have lots of budget and friends in ad agencies, you can release music videos on YouTube that may become popular ... Hmmm ... sounds like this model may have scalability issues and entry-barriers ;(. BTW, how can a recorded hologram do a live performance? Did someone redefine "Live". Nice exposure, and some flashing lights and music, but as an amateur musician interested in digital distribution, the talk left itself me wanting.

The Near Future of Cross Border Settlement Business 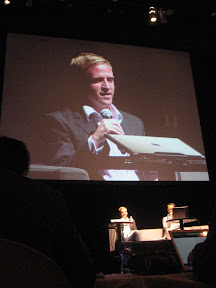 While framed clearly in the terms of EContext, DG's settlement unit, this session had the presenation I found most interesting of the day. Matt Flannery told the story of Kiva, a Social Microfinance site that he set up with some friends. The idea caught on, especially after exposure on the popular "Oprah Winfrey Show" in the US.

Joi Ito rounded off by talking about the Strength of Weak Ties - a concept that guides this blog, as noted on the right hand panel. 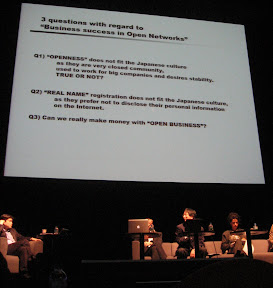 The final session of the day was "Silicon Valley in Tokyo" - another "loosely coupled" panel discussion.

Ellen Levy - a VP at Linked In, spoke about some of the monetisation options available - Advertising, Job Listings, Corporate Solutions, Subscriptions and Market Research.

Jiro Kokuryo from Keio University couldn't have been more different from Takemura-san - his academic colleague in the earlier session. He came armed with some statistics from research about Japanese attitudes towards openness and anonymity and how they manifest on Open Networks. The impression he gave is that Japanese face the same dilemma as everyone else - positive reinforcement versus the risk of confrontation drive participation in Social Media - so Japanese users will participate if your service can find the right sweet spot of benfit vs. risk.

Julie Hanna Farris from SocialText spoke social networks and the "Brand of Me", and Mikihiro Yasuda from Kakaku.com finished off the session talking about the growth of Kakaku.com and it's API services.

Linking Blogs | 3410 Views
Related Blog Entries
Comments (Comment Moderation is enabled. Your comment will not appear until approved.)
No Tweetbacks

There are no comments for this entry.