I had a couple of things on, so I didn't catch the whole of the second day. I missed the opening session on the mobile internet, and Joi's closing about "The Next Big Thing" ... if anyone heard what the "Next Big Thing" is please drop me a note!

First session was the curiously entitled "Mash-up as a key for the rapid progress of internet consumer service" - the original title 「マッシュアップで時代の先を読む」 (Reading the era ahead with mashups??) I also found a little odd.

Loic Le Meur, Founder, Seesmic - Showed off Seesmic - a video twitter, and twirl, a desktop twitter client. The 3D navigation of Seesmic was cool if not so practical (why is that so often the case with 3D interfaces on 2D devices?)

He also talked about his service branding Seesmic for use on other sites, such as The X-Files Movie with a branded Seesmic player, and how the BBC use Seesmic to gather feedback...

Lisa Sounio, Founder of Dopplr spoke about her service that she started with a few friends. She talked of different aims - beauty plus utility. I never travel enough to get the utility from Dopplr - a point reinforced by Lisa who said if you come to Dopplr, don't come alone!

Monetising the service - yes the eternal question - Lisa said the opportunities are there to leverage the "Data Set of Future Travel Plan", and of booking trvel through the site, but did not give more specifics.

Chamath talked up Facebook and all of its services.

He dived into the cultural factors in social networking. While they have found outstanding success internationally, his interesting admission was that "the layer of opaqueness means that Facebook does not yet have a clear model for Japan." Here he was referreing to the reluctance of many Japanese people to user their real names online - something which is expected behaviour on Facebook.

Andrew is previously famous as one of the team who exposed the Printer Industry's "hidden dots" identifier markings on documents printed from colour laser printers. Now he is neck deep in something much more cuddly ... the Chumby!

For those who have not heard of it, Chumby is a "Widget Device" and associated online service to manage the widgets that appear on it. It is an early start in the internet dedicated devices market.

What sets the Chumby project apart is that in additon to being an open platform, the hardware spec is also open source, meaning that anyone can produce compatible devices.

The device is a cute little box covered with soft materials, with a touch screen on the front. There was a conscious decision not to include any other input devices, as this would dilute the focus of the device. It also has a speaker and a motion sensor inside that can be used for controlling games.

Users configure their Chumby widgets online, and the device connects by wifi to the 'net, where it connects to the widgets.

Widgets have an open API, and over 700 have been created by the Chumby community. They can be previewed on a "Virtual Chumby" on the website, before adding to your own Chumby feed.

I see no sign of a microphone, which I think would be a nice addition - it would allow for a skype widget which would be great for chatting for free without the boot-up! Perhaps you can do something with the USB connection.

First up was Chris Alden, CEO of Six Apart. He discussed how blogging had matured in the 10 years it has been around, from an activity to an industry, from a hobby to a career, and from an experiment to a strategy.

Bloggers are influencers, and as long as they continue to be so will attract advertising dollars. Six Apart Media is an aggregation of 600 pro bloggers, with 1000 more in the pipeline. Six apart shares Ad revenues with these bloggers. 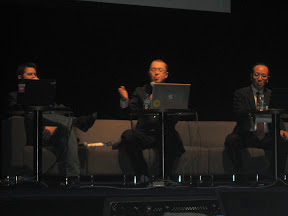 Next was Marko Ahtisaari, Founder of Blyk, giving the run down on his service, which promises free mobile air time in exchange for interacting with commercials. The service strictly targets 16 to 24 year olds, so the advertising matches appropriately. He calls this approach "Advertising as a Service" ... ie. something with a direct and tangible benefit to the user. Done in an engaging and entertaining way, he says "they come for the free airtime, they stay for the advertisments."

High value targetting means that the average UK cellphone user can cover their calling charges by viewing 6 ads per day.

Next up was Yosuke Watanabe from Nikkei BP

NikkeiBP are an established publisher, with a conservative background, but are becoming more open. Their stated goal is to connect professionals with professional content. On the back of this community is a strong adversiting proposition.

He also said that they are now seeking new more innovative types of advertising.

The session was rounded out by Takahiro, pro blogger at Mediologic.com, and that's about where I had to leave.


Later I rejoined the post conference drinks, where I had great chats with Lisa from Dopplr, Julie from SocialText, and Andrew from Chumby. The topic of conversation drifted to the iPhone - as it is so wont to do ...;) - and some of the missing features that might be desirable in the Japanese market. I showed off some features of my Casio W42CA.... see the slideshow for more. :)

Linking Blogs | 2927 Views
Related Blog Entries
Comments (Comment Moderation is enabled. Your comment will not appear until approved.)
No Tweetbacks

Ahh, a beerproof phone. Cool! A friend's iPhone recently drank a beer in his backpack, and Softbank charged him the full price to replace it. Fun demo.
# Posted By Nick Westgate | 11/28/08 6:58 PM
[Add Comment]
BlogCFC was created by Raymond Camden. This blog is running version 5.9.1.002. Contact Blog Owner